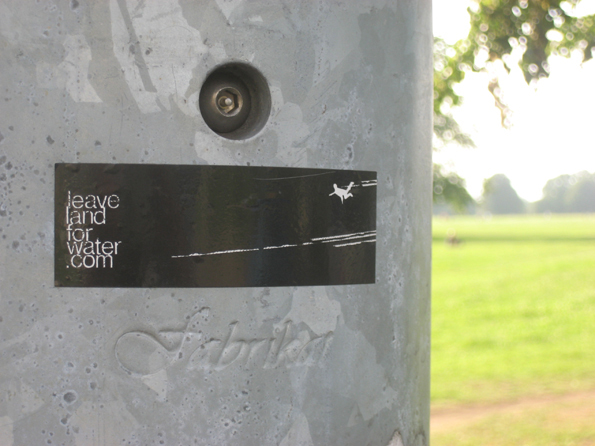 I noticed this sticker on a lamppost the other day. I’ve no idea how long it’s been there, but once I’d seen it I couldn’t get it out of my head. After a quick web search it turns out that “Leave Land For Water” isn’t an eco-awareness campaign. It’s a band. They formed in Bristol four years ago and they’ve been using these stickers to gain a loyal following ever since. And they’re not bad either. After listening to their stuff on iTunes I downloaded two of their tracks and have forwarded their web address to a group of music enthusiasts I know in Canada. And all without seeing a leaflet or a press ad. Obviously I’m not advocating sticking things all over lampposts, but there is a lot to be said about minimal advertising. Sometimes it pays to hold back a little. By creating intrigue you’re tapping into a person’s natural sense of curiosity. When a little effort is required people will hold the information they’ve gained in higher value because they’ve earned it.

I’m sure that one day companies will realise that they don’t need to cram so much wasted copy into their leaflets and brochures. Until then I’ll always have one eye on the stickers on the lampposts.