The staff at Signal Snowboards are clearly a creative lot having built some of the most innovative snowboards of recent years. But last Summer they decided that building conventional snowboards wasn’t enough, so in June 2010 they began the “Every Third Thursday” Project – to design and build a fantastically ridiculous snowboard each month for their team of Pro riders.

Since the project started, the designers have built everything from a Golfing Snowboard to a Karaoke snowboard, and now in their latest venture they have launched the Paintballing snowboard, and yes it does exactly what you think it does. The four snowboards with mounted paintball guns were built in one day and when they’re handed out to the riders the result is, well, predictable.

The short films that accompany each project are a lot of fun, but there is a serious side. Allowing the Signal design team to build outrageous snowboards not only gives the company a little free marketing but also, and perhaps more importantly, it is a chance for the employees to challenge themselves creatively. In any creative job people need to be inspired, to have the freedom to try new things, because without creative inspiration we are no longer creative.

So for now, on Every Third Thursday, the designers at Signal will build another completely outrageous snowboard that uses up valuable time and material, it will never go into production and it will cost Signal money. And the employees, and the company, will be all the better for it. See the films here. 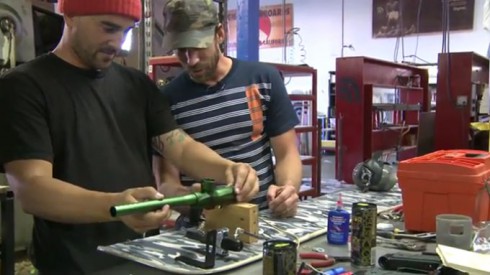